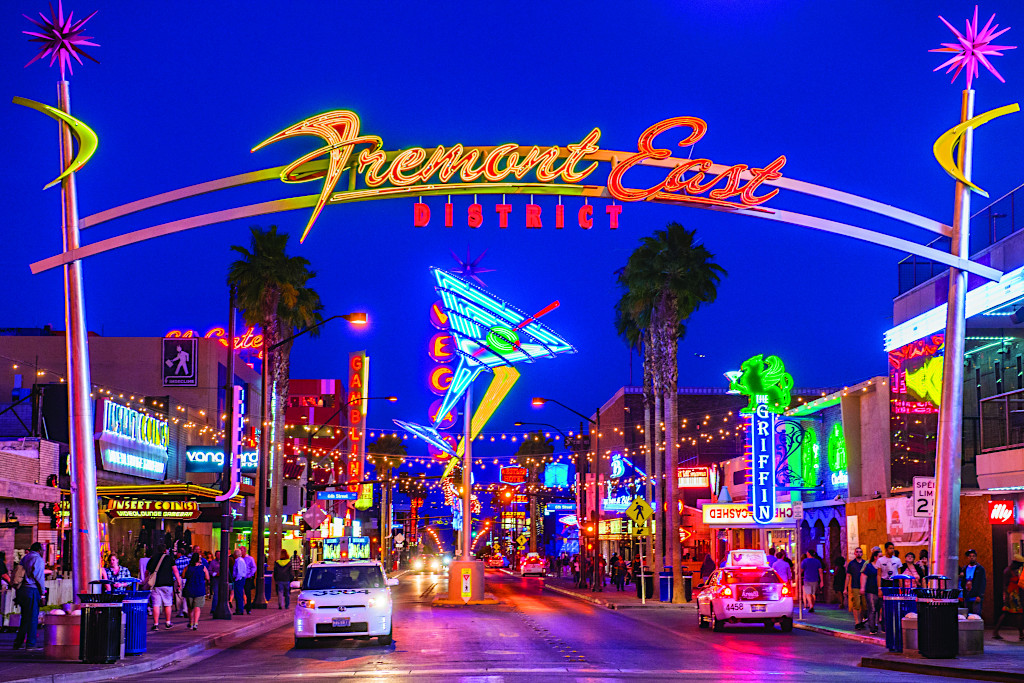 How neon signs became the defining art form and calling card for Las Vegas is a transporting tale of transatlantic time travel.

The “noble” sextet, so termed because they royally resist bonding with other atoms, included an element that the partners named neon after the Greek “neos” for “new.”

Neon is odorless and colorless. However, when extracted from liquified air, sealed in a vacuum tube, and zapped with electricity, as French inventor Georges Claude discovered in 1902, this invisible aristocrat glows crimson red. In 1912, he installed the world’s first neon sign at a Parisian barbershop. 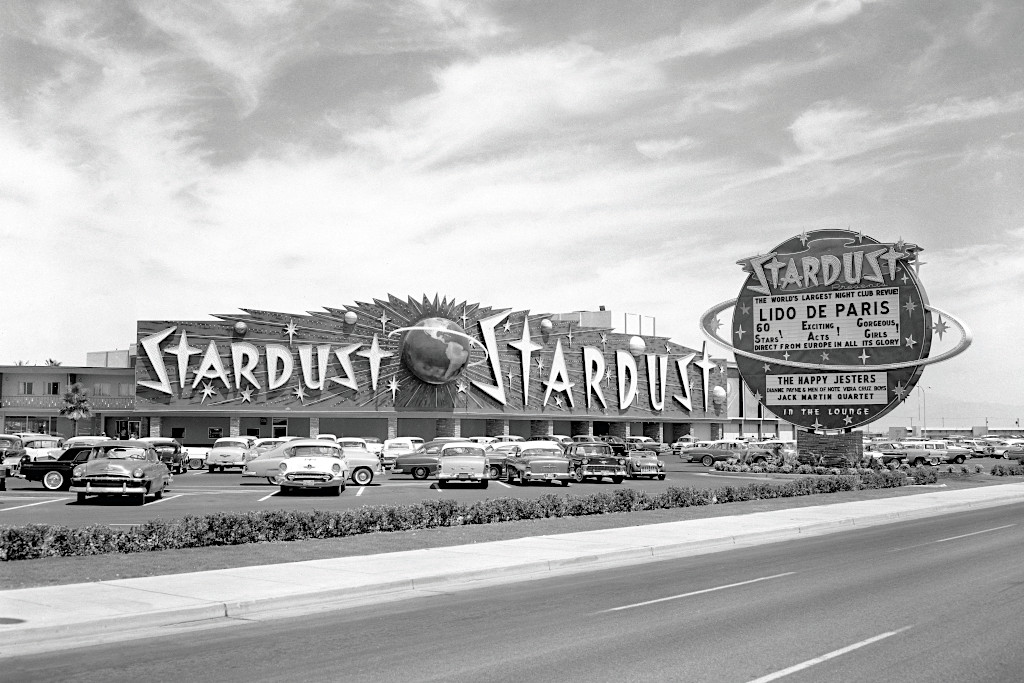 This is an exterior view of the Stardust in Las Vegas, Nevada on July 22, 1958.
Photo: Jerry Abbott/Las Vegas News Bureau.

As neon fever similarly revolutionized American cityscapes, Thomas Young emerged as the pioneer of the form in the U.S.  In 1910, Young’s father moved the family from northern England to Ogden, Utah, to seek a better life. Then 15, Young, who loved drawing and painting, apprenticed as a sign writer. 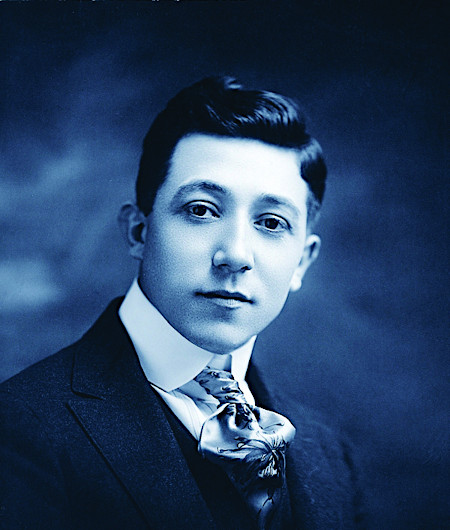 In September 1928, when Las Vegas was a struggling railroad town facing an uncertain future, Ethel Guenter, owner of the Overland Hotel at Fremont and Main, unveiled the town’s first neon sign. Authorized by Congress that December, construction of the Boulder Dam (renamed Hoover in 1947) began in March 1931, when Vegas also legalized gambling. The project attracted mass tourism, which energized Vegas. Opportunity was incandescent, and in 1932, Young plugged right in.

His early successes included designing an impressive vertical neon sign featuring a stein of flowing beer for the Boulder Club, an original Fremont gambling hall. After relocating to Salt Lake City in 1937, and opening a Vegas branch in 1945, YESCO created a dazzling new Boulder Club sign with a marquee depicting the Boulder Dam.

“It was the first neon spectacular in Vegas, and from that moment the race was on,” said his grandson Jeff Young, YESCO’s senior vice president and chief marketing officer, and one of a dozen direct descendants working with the company today. “The casino with the flashiest sign got the most customers, so with each new display, the next guy wanted something bigger.”

YESCO transformed Fremont Street into “Glitter Gulch” with one showstopper after another. Installed in 1951 at the Pioneer Club, “Vegas Vic” was then the world’s largest animated electric sign. Once welcoming visitors with his waving arms and automated “Howdy Podner” greeting, the 48-foot-tall mechanical cowboy still stands under the 90-foot-tall Fremont Street Experience LED canopy, another YESCO project.

The owners of The Mint Hotel & Casino (1957) wanted the “biggest, brightest, most beautiful sign ever.” Documented in YESCO’s 1959 promotional film The Birth of a Giant, Chief Designer Ben Jones (whose grandson Ben has long headed up structural engineering for YESCO) and colleagues delivered a beacon for the ages. Visible from 30 miles away, a neon beam raced along the sign’s curving “eyebrow” and nine-story pink and white pylon with its crowning 16-foot-tall star. Luminous 1958 legends include the giant filigreed Gold Rush-inspired Golden Nugget sign, and the Stardust, with its galactic façade and Atomic lettering. Later highlights included the Hacienda Hotel’s namesake Horse and Rider (1967) and original Circus Circus carousel sign (1969). 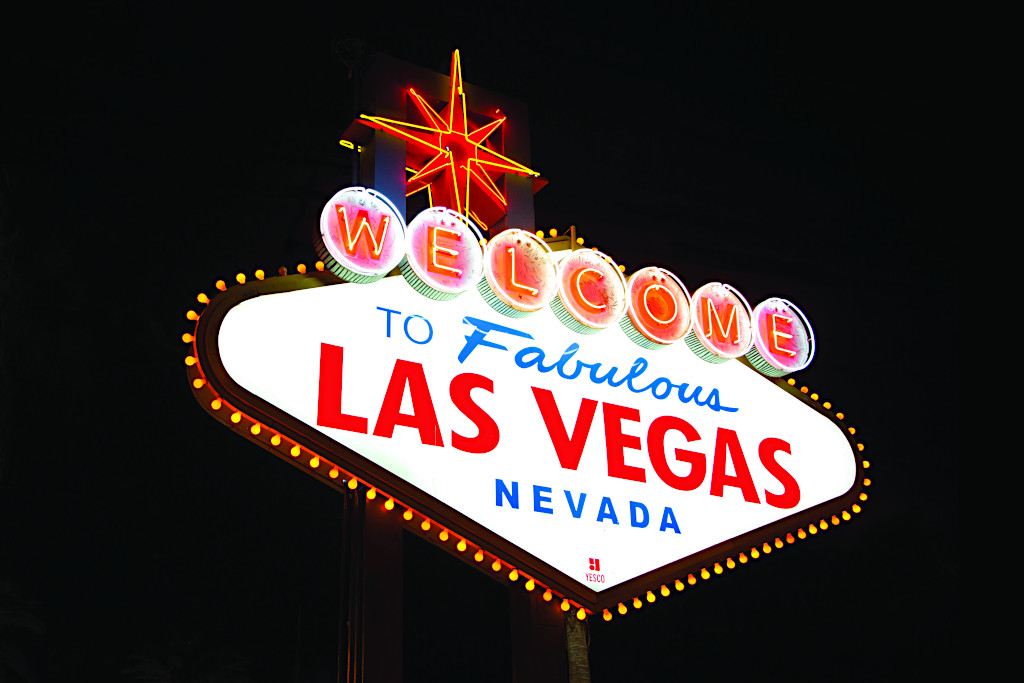 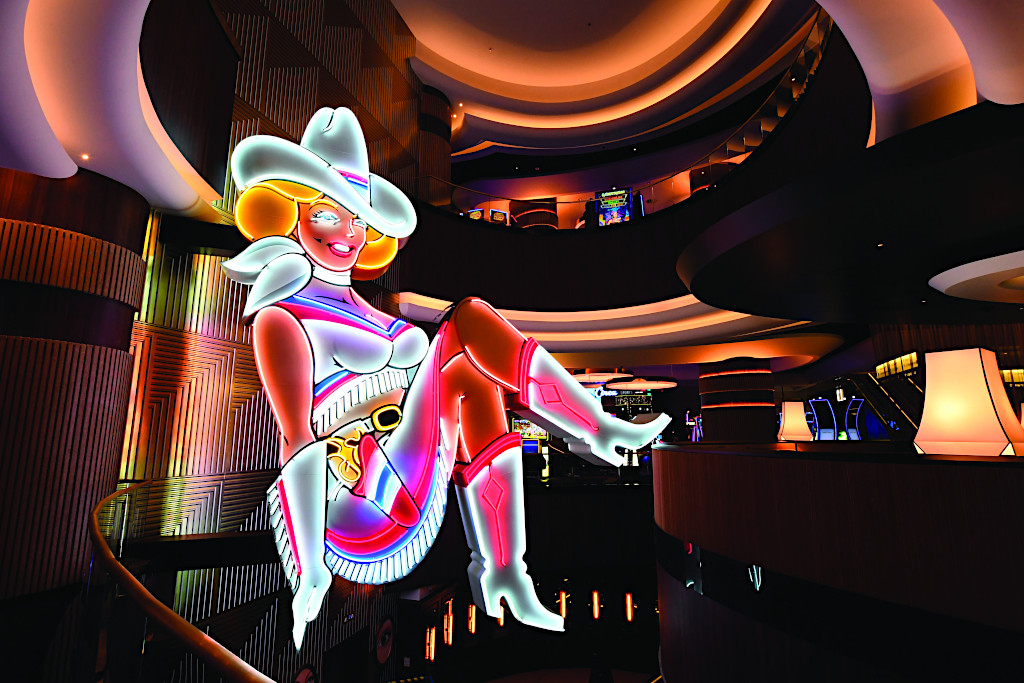 Vegas Vickie inside Circa Resort & Casino

By 1971, the year Thomas Young died, neon started fading away in favor of cheaper materials. Yet YESCO, which operates across North America, evolved with the times, producing Lucky the Clown for Circus Circus in 1976 and the former 225-foot-tall Sahara sign in 1980. Later clients include ARIA, Wynn, Encore, and The Cosmopolitan of Las Vegas, with its eye-catching tower-top Beacon sign.

Hot new customers include Resorts World Las Vegas, scheduled to open this summer on the former Stardust site; and 65,000-seat Allegiant Stadium, featuring 4,000-plus signs. Opened last year where the Overland Hotel once stood, Circa Resort & Casino features some of the largest exterior lettering ever created in Vegas, as well as YESCO’s painstaking restoration of 1980 neon cowgirl Vegas Vickie in the lobby cocktail lounge.

YESCO also created and installed the new Gateway Arches. Illuminated last November, when YESCO received the Key to the Strip for its centennial anniversary, the 80-foot-tall structure, featuring 13,000 LED lights, is the official gateway to the City of Las Vegas.

YESCO is devoted to preserving the inherently nostalgic history of vintage signage. Since acquiring rights in 1964, YESCO has maintained Betty Willis’s landmark 1959 “Welcome to Fabulous Las Vegas” sign. In March 2020, the company’s restoration of Willis’s 1957 Blue Angel Motel sign was reinstalled at Charleston and Fremont. 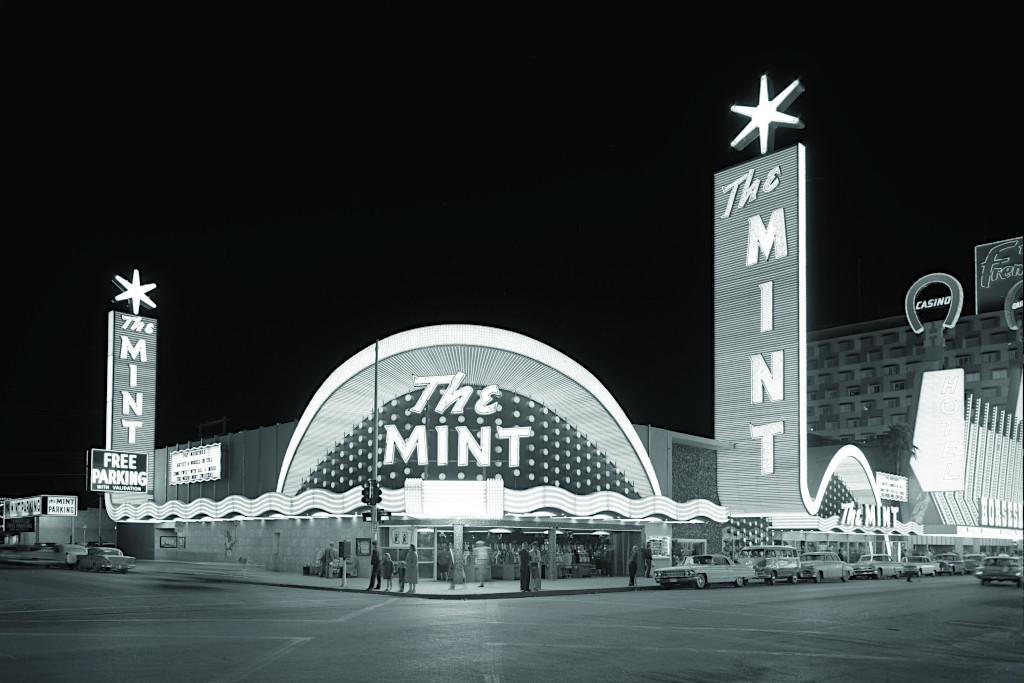 Long storing abandoned signs in its boneyard, YESCO is a key partner of the Neon Museum (www.neonmuseum.org), which “debuted” in 1996 by installing the refurbished Horse and Rider sign at Las Vegas Boulevard and Fremont before officially opening in 2012. YESCO’s 1958 Silver Slipper sign stands outside the museum.

In 2019, neon (Ne) became Nevada’s official state element. That same year, following a restoration campaign funded and coordinated by the Neon Museum, the 82-foot-tall guitar that YESCO had created for the Las Vegas Hard Rock Café in 1995 became an electrifying fixture of the Neon Museum’s Boneyard

“Twenty-five years is not that old in Vegas,” said Young. “Think of what that guitar will represent to future generations of visitors, though. Every sign tells a story, and we embrace our role as guardians of their spirit and legacy in the Vegas community.” 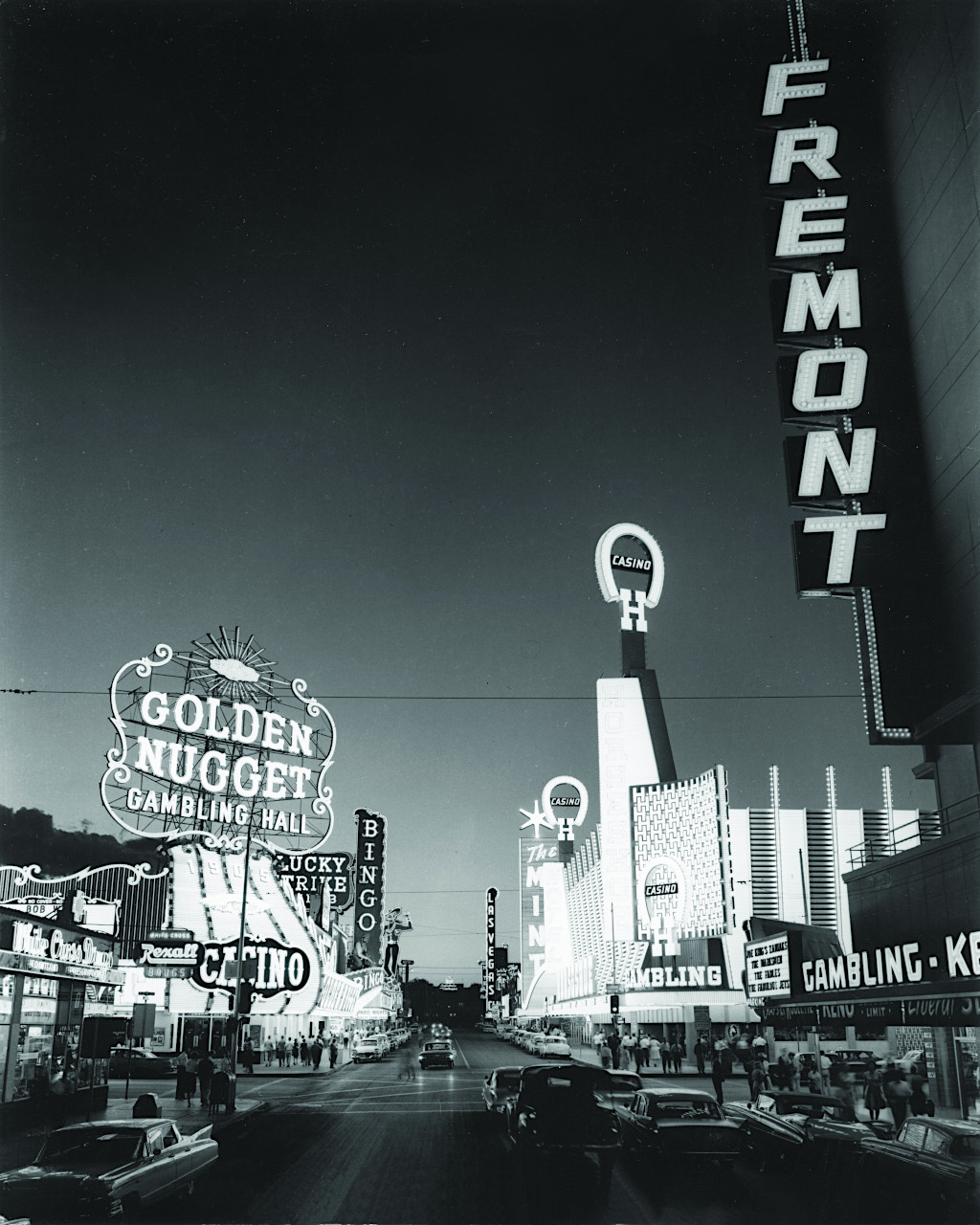 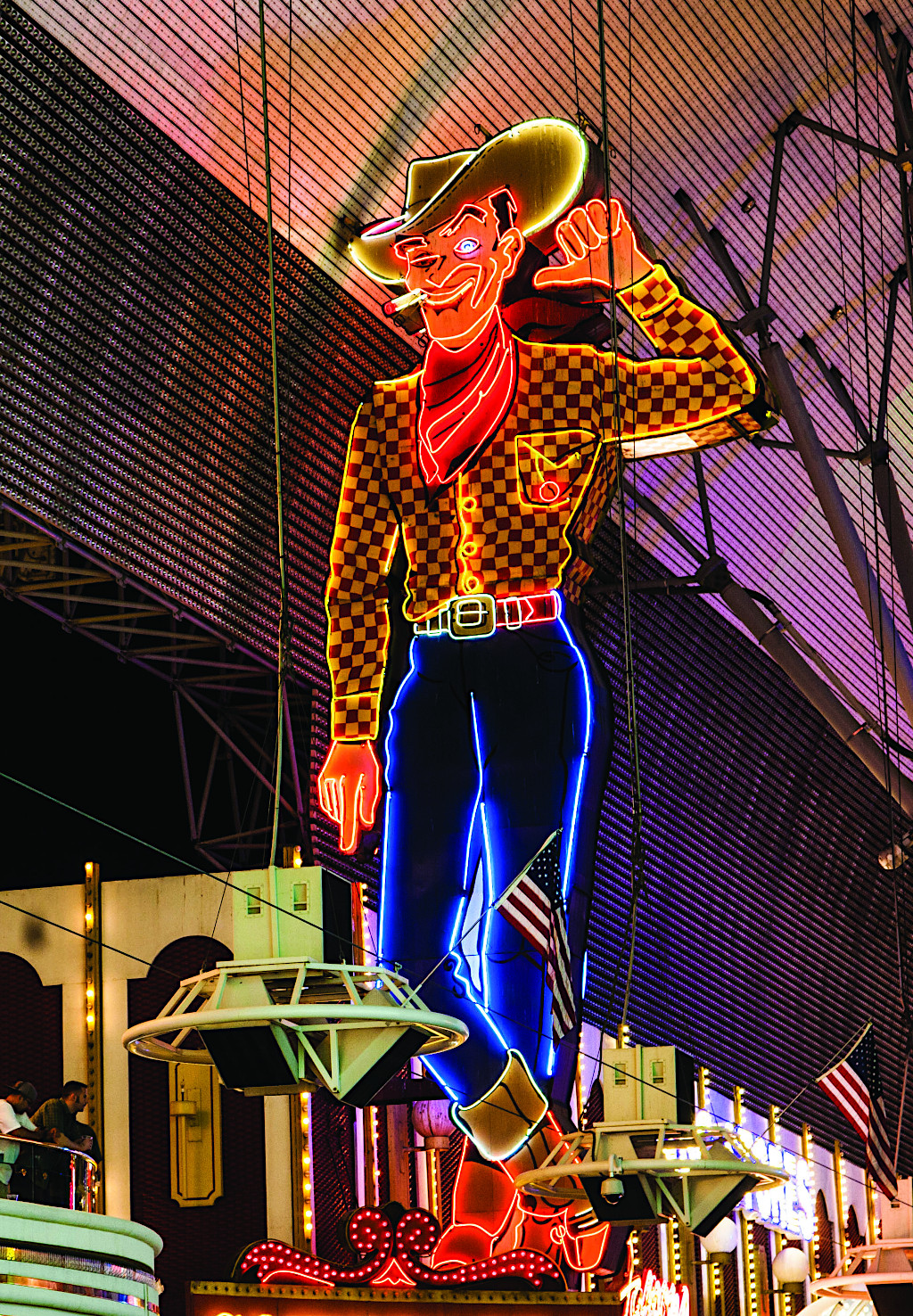 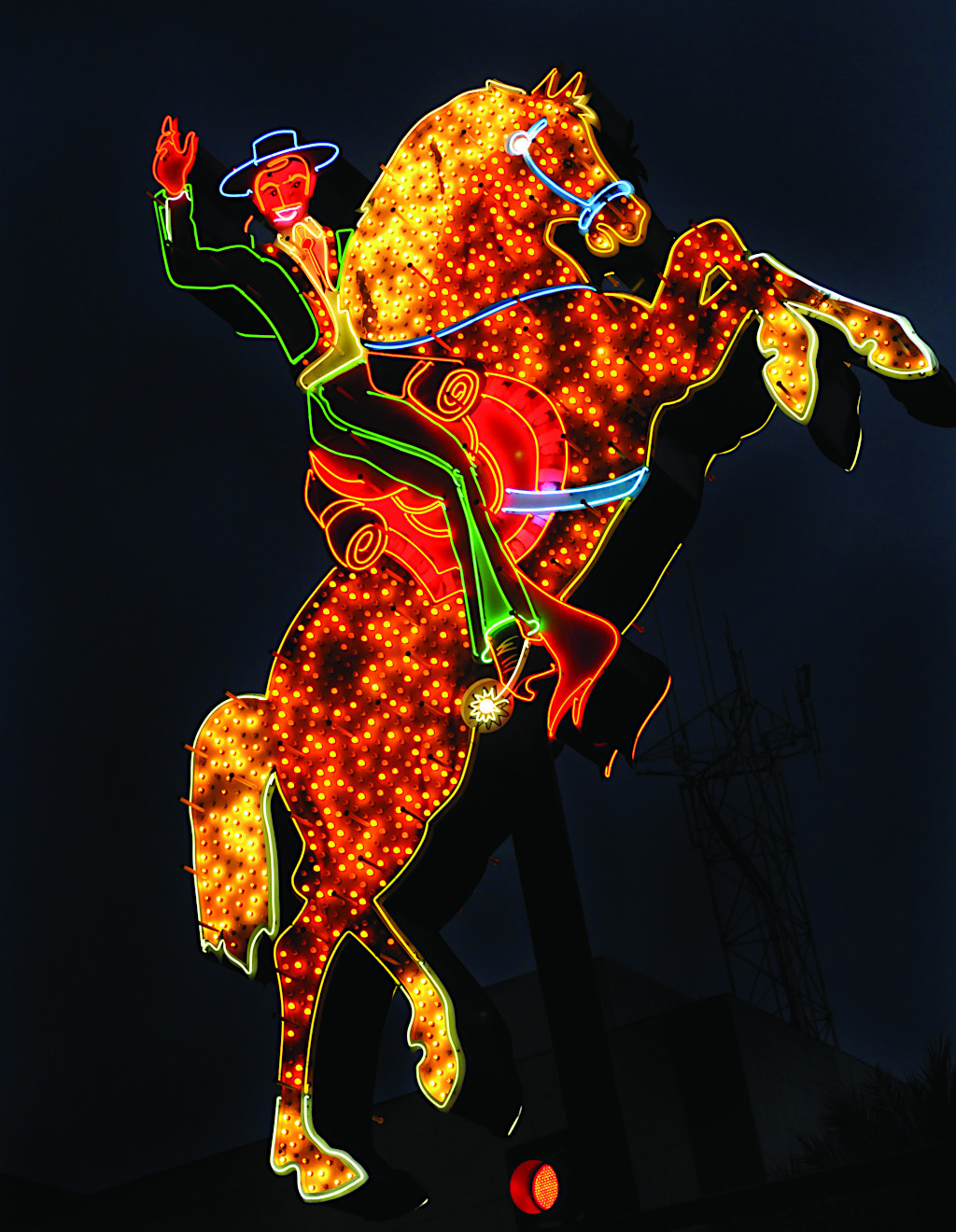 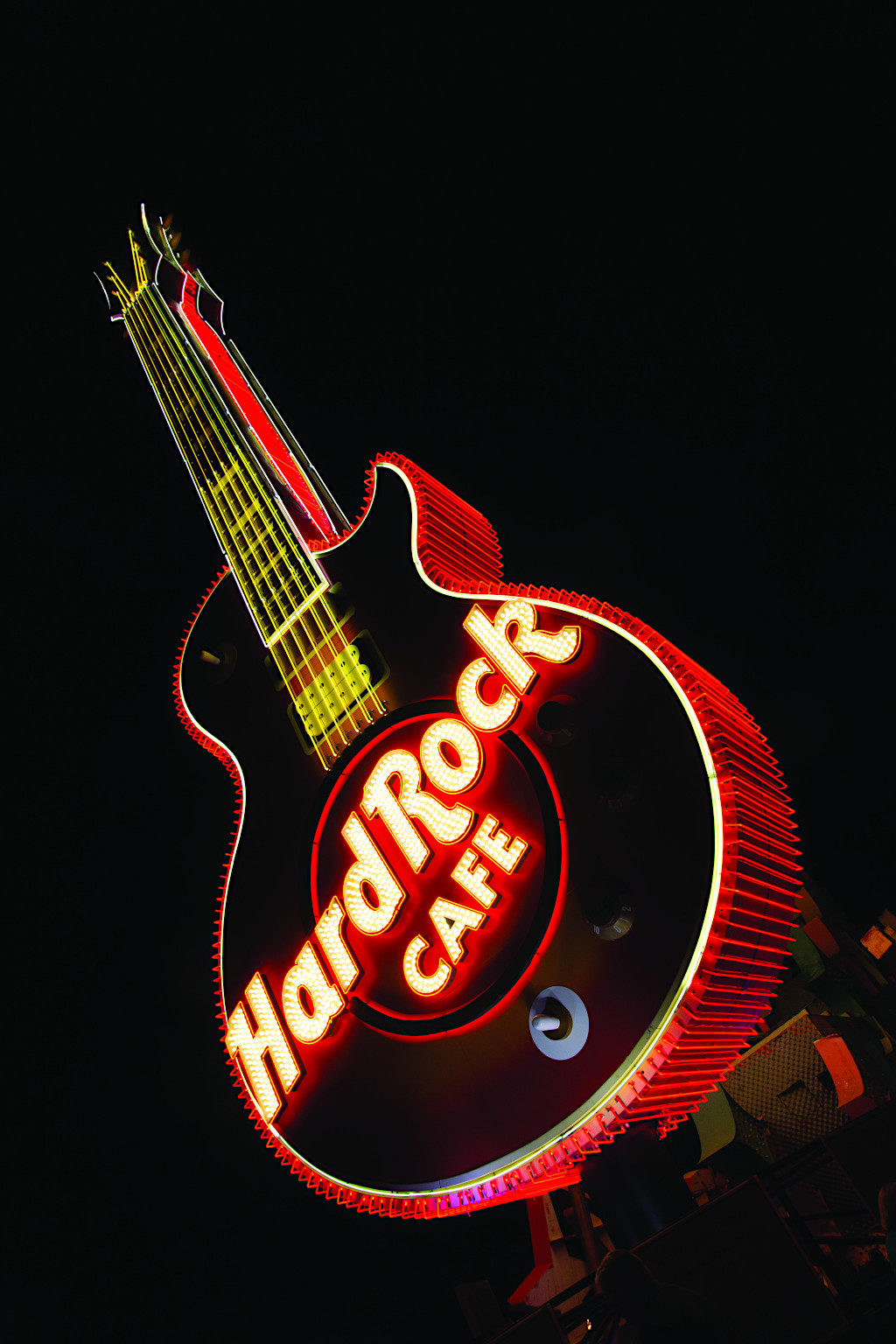 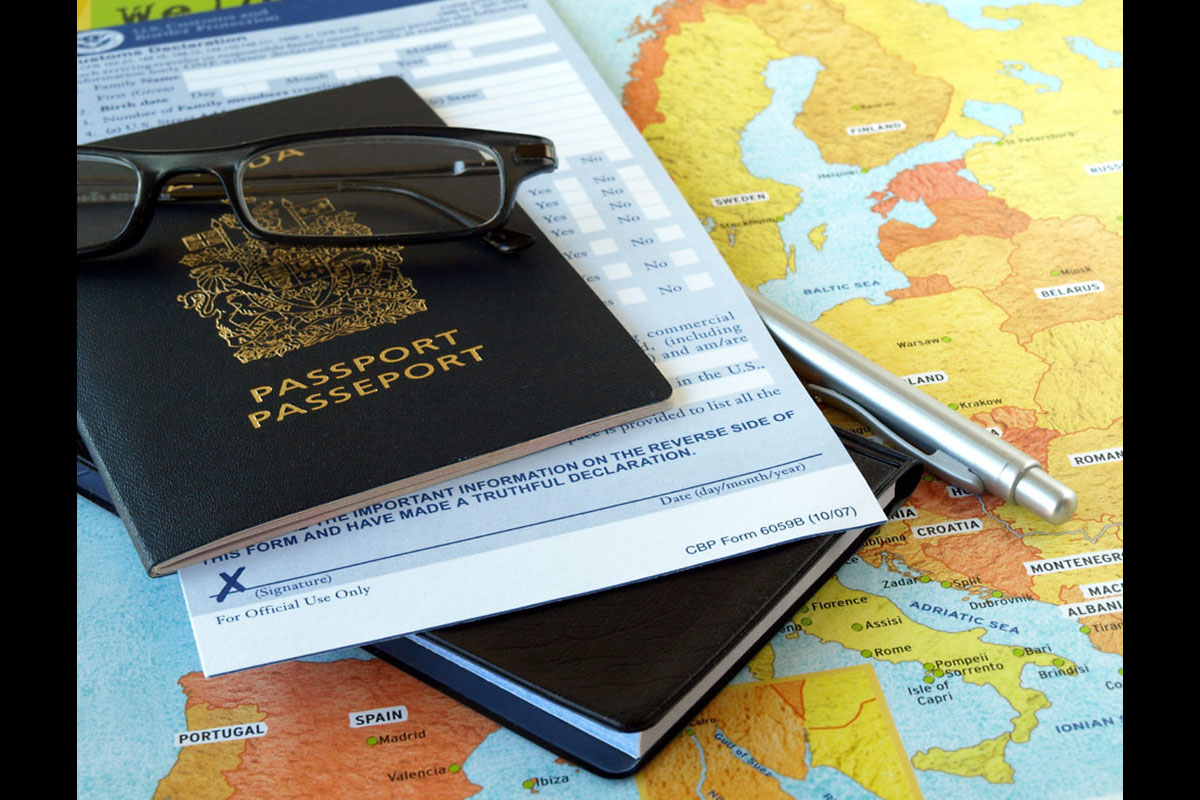 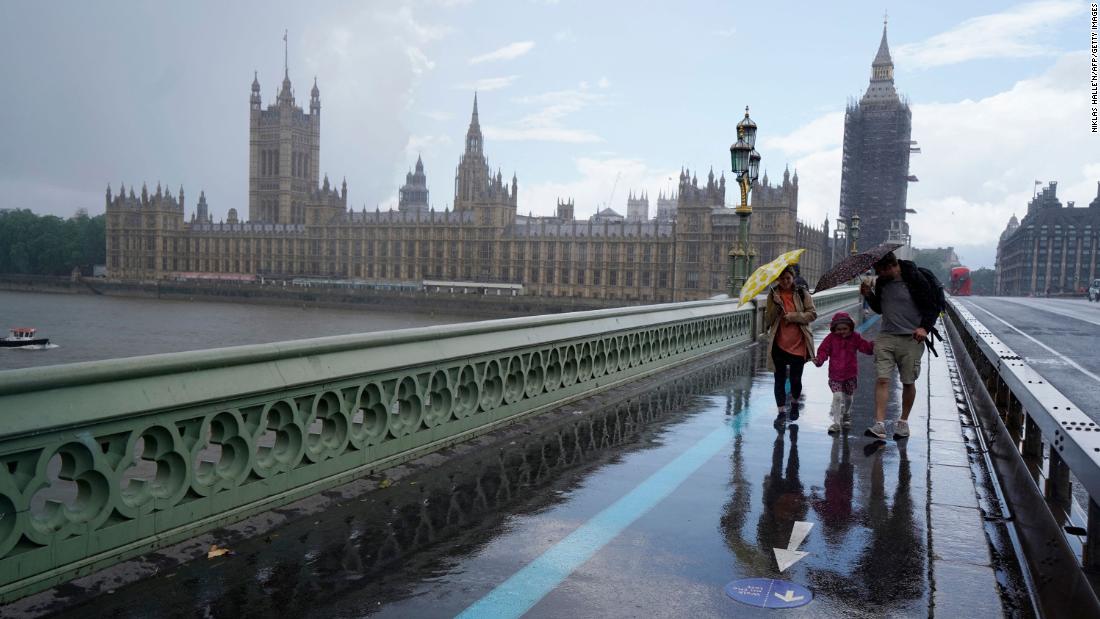 Next post Delta variant journey: Most current limits and news for worried travellers